The German pianist, Gerhard Oppitz, started playing the piano at 5. He gave his first public concert at the age of 11, performing Mozart’s D minor concerto where he was discovered by Paul Buck, professor at the Musikhochschule in Stuttgart. He studied with Buck until 1974 when he moved to Munich to attend Hugo Steurer’s master-class. In 1973, Gerhard Oppitz met Wilhelm Kempff who soon became his guide and mentor. Wilhelm Kempff invited the young pianist to attend his private master-class in Positano where he coached him in the sonatas and concertos of L.v. Beethoven. Wilhelm Kempff was impressed by the striking similarities in their interpretative outlooks. It was Wilhelm Kempff’s own wish that after his death, Gerhard Oppitz should continue the German musical tradition that linked them so closely.

Gerhard Oppitz’ own career opened up internationally in 1977 when he became the first German to win the coveted Artur Rubinstein Competition in Tel Aviv. This achievement and quasi political event led to concert tours across Europe, Japan and the USA. In 1978, he recorded the first of many discs, and the same year was offered a post as professor at the Munich Musikhochschule. Initially concerned that this activity would clash with his concert engagements, he finally, in 1981, accepted to teach a master-class, becoming the youngest professor in the history of the Musikhochschule.

Gerhard Oppitz has a wide and diverse repertoire. Performances of complete piano cycles feature prominently in his concert program: Schubert’s solo piano music, L.v. Beethoven and Mozart sonatas, J.S. Bach's Well-Tempered Clavier, Grieg and above all, the complete works of Johannes Brahms, a composer with whom Oppitz is internationally recognized for having a special affinity. He has performed over 17 complete J. Brahms cycles in most of the major cities of Europe including London, Geneva, Frankfurt, Leipzig, Munich, Paris, Milan, Rome, Berlin, as well as in Tokyo, and elsewhere. Gerhard Oppitz has earned a reputation in the performance of contemporary music, particularly in works by Lutoslawski, Ligeti, Veerhoff, Pierre Boulez, Messiaen and Stockhausen.

In 1997, Gerhard Oppitz, in his role as a leading international Johannes Brahms specialist, was invited across Europe and Japan to interpret the composer’s two piano concertos during the centenary year of the composer’s death. Highlights in 2000-2001 included varied recital and concert appearances in all the most important European capitals, performances with the Montreal Symphony Orchestra and New Jersey Symphony Orchestra and a four week concert tour in Asia.

Gerhard Oppitz' discography comprises over 30 titles. During the last ten years, he has recorded for RCA Red Seal. His 1990 release of the complete solo piano works of J. Brahms has been followed more recently by the two piano concertos with Sir Colin Davis and the complete solo piano works of Grieg on 7 CDs. Oppitz’ latest recording success comprises a 3-CD set of L.v. Beethoven’s Piano Concertos recorded with the Gewandhausorchester Leipzig and Marek Janowski. This is the first complete cycle to be recorded with the Gewandhausorchester Leipzig, and also includes L.v. Beethoven's own transcription for piano of his violin concerto. Another recent CD release, with Sir Colin Davis and the Sinfonieorchester des Bayerischen Rundfunks, presents 4 works for piano and orchestra by Weber and the two piano concertos, the Konzertstuck and the Polonaise Brillante, the latter in an orchestration by Franz Liszt. Gerhard Oppitz also makes regular television and radio appearances, particularly in Germany, France and Japan, where the main NHK station recently broadcast seven hours of prime time programs around his performances and master-classes of L.v. Beethoven sonatas, to tie in with a tour he made around the country.

In addition to Gerhard Oppitz's busy playing and teaching schedule, the pianist also has a broad spectrum of other interests: he is a qualified amateur air pilot and frequently pilots himself to his concert engagements across Europe. He is an informed gourmet (never traveling to concert engagements without the appropriate restaurant guides) and a connoisseur of fine wines. He speaks seven languages and lives with his Japanese wife near Munich. 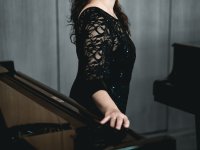