Born in Rumania, Radu Lupu started piano lessons with Lia Busuioceanu at the age of 6. At the age of 12 he made his public debut with a complete programme of his own music. He continued his studies for several years with Florica Muzicescu and Cella Delavrancea before winning a scholarship in 1961 to the Moscow Conservatoire where he studied with Galina Eghyazarova, Heinrich Neuhaus and later with Stanislav Neuhaus. He won first prize in three competitions: the 1966 Van Cliburn, the 1967 Enescu International, and the 1969 Leeds International.

Mr Lupu has performed with all the great orchestras of the world, including the Berlin Philharmonic (with whom he made his Salzburg Festival debut in 1978 with Karajan), the Vienna Philharmonic (with whom he opened the 1986 Salzburg Festival with Muti), the Royal Concertgebouw, all the major London orchestras, and all the great American orchestras. In the USA his first significant appearances were in 1972 with the Cleveland Orchestra and Barenboim in New York, and with the Chicago Symphony and Giulini. He has played at most of the notable music festivals and has been a regular guest at the Salzburg and Lucerne Festivals.

His recordings for Decca include the Beethoven Piano Concertos, Brahms Concerto No 1, Grieg and Schumann Concertos, the complete Mozart Violin and Piano Sonatas with Szymon Goldberg, Debussy and Franck Violin and Piano Sonatas with Kyung Wha Chung, and solo works by Beethoven, Brahms, Schumann and Schubert. In 1995 he won 2 awards in the category “Best Instrumental Record of the Year”: a Grammy for Schubert’s Sonatas in A major D664 and B flat major D960, and an Edison Award for Schumann’s Kinderszenen, Kreisleriana and Humoresque. He has also made two records with Murray Perahia (CBS), two albums of Schubert Lieder with Barbara Hendricks (EMI), and a disc of pieces for four hands by Schubert with Daniel Barenboim (Teldec).

In the 2015/16 season Mr Lupu’s engagements included the Gewandhausorchester Leipzig, the Cleveland Orchestra, the Orchestra della Santa Cecilia in Rome, the Stockholm Philharmonic Orchestra, the Orchestre de Paris, the Concertgebouw Orkest and the Zurich Tonhalle-Orchester. He gave recitals in Paris, Berlin, Vienna, Amsterdam and at the Lucerne Festival.

In 2006 Mr Lupu was presented with two awards: the Premio Internazionale Arturo Benedetti Michelangeli, and, for a second time, the Abbiati prize (conferred by the Italian Critics’ Association). He had previously won this in 1989. 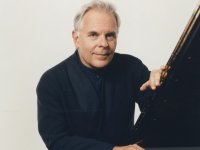 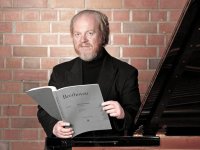