Gil Shaham is one of the foremost violinists of our time; his flawless technique combined with his inimitable warmth and generosity of spirit has solidified his renown as an American master. The Grammy Award-winner, also named Musical America’s “Instrumentalist of the Year,” is sought after throughout the world for concerto appearances with leading orchestras and conductors, and regularly gives recitals and appears with ensembles on the world’s great concert stages and at the most prestigious festivals.

Long recognized as one of its finest exponents, it is with Korngold’s concerto that Shaham launches the 2015-16 season at the Berlin Philharmonic under Zubin Mehta. Besides reprising John Williams’s concerto with Stéphane Denève and the Boston Symphony, where he previously recorded the concerto under the composer’s direction, he performs Bach with the Los Angeles Philharmonic and Gustavo Dudamel; Brahms with the Orchestre de Paris; Tchaikovsky with the Orchestra del Teatro di San Carlo and the New World, Sioux City, and Nashville Symphonies; and Mendelssohn during a Montreal Symphony residency and on a European tour with the Singapore Symphony. Shaham’s long-term exploration of “Violin Concertos of the 1930s” enters an eighth season with performances of Bartók’s Second with the Chicago Symphony and the Philadelphia Orchestra at Carnegie Hall and the Kimmel Center, Barber with the Orchestre National de Lyon and Orchestra dell’Accademia Nazionale di Santa Cecilia, and Prokofiev’s Second on an extensive North American tour with The Knights to celebrate the release of Violin Concertos of the 1930s, Vol. 2. Issued on the violinist’s own Canary Classics label, this second installment pairs his recordings of Prokofiev with The Knights and Bartók with the Stuttgart Radio Symphony. As well as undertaking a tour of European capitals with Sejong and a residency at the University of North Carolina at Chapel Hill, Shaham continues touring to London’s Wigmore Hall and key North American venues with accounts of Bach’s complete unaccompanied sonatas and partitas in a special multimedia collaboration with photographer and video artist David Michalek.

Last season, Shaham headlined the Seattle Symphony’s opening-night gala, before joining the San Francisco Symphony and Michael Tilson Thomas for Prokofiev’s Second at Carnegie Hall and other stops on the orchestra’s 20th-anniversary tour. The Prokofiev was one of the works showcased in the “Violin Concertos of the 1930s” project, which also took him to the Philadelphia Orchestra for Berg and to the Berlin Radio Symphony and London Symphony Orchestra for Britten. Besides premiering David Bruce’s new concerto with the San Diego Symphony, the violinist’s orchestral highlights included Bach with the Sydney and Dallas Symphonies and Mendelssohn in Tokyo, Canada, Luxembourg, and with Gustavo Dudamel and the Los Angeles

The violinist already has more than two dozen concerto and solo CDs to his name, including bestsellers that have ascended the charts in the U.S. and abroad. These recordings have earned multiple Grammys, a Grand Prix du Disque, Diapason d’Or, and Gramophone Editor’s Choice. His recent recordings are issued on the Canary Classics label, which he founded in 2004. They comprise 1930s Violin Concertos (Vol. 1), recorded live with the New York Philharmonic, Boston Symphony, BBC Symphony, Staatskapelle Dresden, and Sejong; Haydn Violin Concertos and Mendelssohn’s Octet with the Sejong Soloists; Sarasate: Virtuoso Violin Works with Adele Anthony, Akira Eguchi, and the Orquesta Sinfónica de Castilla y León; Elgar’s Violin Concerto with the Chicago Symphony Orchestra and David Zinman; The Butterfly Lovers and Tchaikovsky’s Violin Concerto with the Singapore Symphony; Tchaikovsky’s Piano Trio in A with Yefim Bronfman and cellist Truls Mork; The Prokofiev Album and Mozart in Paris, both with his sister, pianist Orli Shaham; The Fauré Album with Akira Eguchi and cellist Brinton Smith; and Nigunim: Hebrew Melodies, also recorded with Orli Shaham, which features the world premiere recording of a sonata written for the violinist by Avner Dorman. Dorman’s sonata is one of several new works commissioned for the violinist, who has also premiered and championed pieces by composers including William Bolcom, David Bruce, Julian Milone, and Bright Sheng.

Shaham was born in Champaign-Urbana, Illinois, in 1971. He moved with his parents to Israel, where he began violin studies with Samuel Bernstein of the Rubin Academy of Music at the age of seven, receiving annual scholarships from the America-Israel Cultural Foundation. In 1981, while studying with Haim Taub in Jerusalem, he made debuts with the Jerusalem Symphony and the Israel Philharmonic. That same year he began his studies with Dorothy DeLay and Jens Ellermann at Aspen. In 1982, after taking first prize in Israel’s Claremont Competition, he became a scholarship student at Juilliard, where he worked with DeLay and Hyo Kang. He also studied at Columbia University.

Gil Shaham was awarded an Avery Fisher Career Grant in 1990, and in 2008 he received the coveted Avery Fisher Prize. In 2012, he was named “Instrumentalist of the Year” by Musical America, which cited the “special kind of humanism” with which his performances are imbued. He plays the 1699 “Countess Polignac” Stradivarius, and lives in New York City with his wife, violinist Adele Anthony, and their three children. 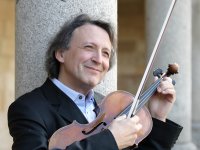